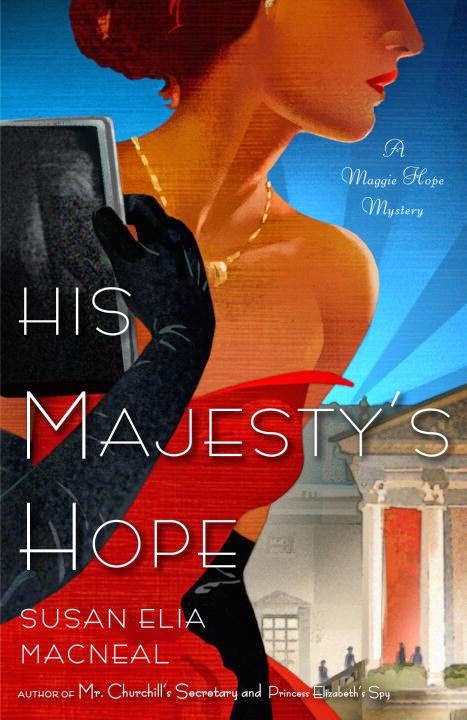 ‘For fans of Jacqueline Winspear, Laurie R. King, and Anne Perry, whip-smart heroine Maggie Hope returns to embark on a clandestine mission behind enemy lines where no one can be trusted, and even the smallest indiscretion can be deadly.
World War II has finally come home to Britain, but it takes more than nightly air raids to rattle intrepid spy and expert code breaker Maggie Hope. After serving as a secret agent to protect Princess Elizabeth at Windsor Castle, Maggie is now an elite member of the Special Operations Executive–a black ops organization designed to aid the British effort abroad–and her first assignment sends her straight into Nazi-controlled Berlin, the very heart of the German war machine.
Relying on her quick wit and keen instincts, Maggie infiltrates the highest level of Berlin society, gathering information to pass on to London headquarters. But the secrets she unveils will expose a darker, more dangerous side of the war–and of her own past.’

I am still trying to figure out this series. The first book was a historical mystery, and I cannot remember if the second one was too or not, but this one was definitely not. It was all about spying during World War II. Which is fine, I just which there was a little more mystery. The book was good, there were some flaws that I couldn’t get pass, but other than that, it kept my attention and I didn’t want to chuck it across the room, so that is a plus. When one thinks of spies, they think of them of not being emotional. They do the job that they are told to do and leave their emotions and lives behind. Maggie Hope is an emotional spy. She lets her heart rule her decisions and it was quite problematic for me, because a spy like that usually tends to get killed and get killed quickly.

Some of the decisions Maggie makes in this book, left me scratching my head wondering why the author thought that Maggie should be so caught up in her role. She takes her past with her everywhere she goes. She cannot leave anything at the door and focus on her job. She is a capable spy, but she is not the typical spy that would make this book more thrilling. Even though I knew it was impossible, honestly, I kept thinking that she was going to get killed. Towards the end of this book, Maggie’s emotions catch up to her and leave her literally broken. It leaves a lot to be desire from the next book, but I’m just wondering where the author plans to take this character.

I think that I was expecting that sassy and smart Maggie from the first two books in this series. Sadly, she never showed up in this one. This Maggie almost seems like a different character. I understand the effects that war has on humans and I imagine it would be worst for someone who is so deeply engaged in it, but still it just didn’t click. It didn’t feel right and I prefer a little more consistency. I wanted my kick-ass Maggie, but all I got was deeply troubled Maggie. By far, not the best in this series. Hoping the next one brings the series back on track as emotional Maggie is just too much for this reader to handle.