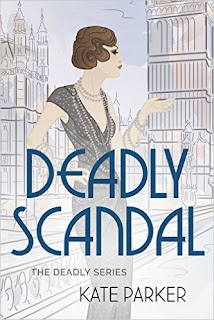 ‘Olivia Denis is a contented young wife with a carefree life in late 1930’s London. Then her world is shattered with the violent death of her husband, Reggie. The police want to call it a suicide and close the case, but Olivia knows Reggie couldn’t possibly have fired the fatal shot.
Further mysteries surface surrounding her husband’s death. Did the trustworthy Foreign Office employee betray government secrets? Was his murder linked to the death of a German embassy clerk the same night? And who searched their flat?
Her desire for answers and her need to support herself cause Olivia to break away from the pampered life she’s known and take a job. But with the much-needed paycheck as a society reporter for a newspaper comes a secondary assignment–one that involves her in the increasingly dangerous world of European politics as the continent slides towards war.’

What a breath of fresh air this book was. A lovely new addition to the historical mystery genre which has lately taken the literary world by storm. This genre, historical mystery, seems to be all the rage these days and one can find an abundance of the genre lining bookstore shelves. It is very hard to be recognized in such a burgeoning new genre, yet this author has done so very brilliantly. This book starts off with the apparent suicide of Olivia Denis’ husband, Reggie. Olivia knows her husband very well and knows that he would never do something so terrible and drastic no matter the cause. Olivia begins to investigate her husband’s last movements and finds evidence that her husband didn’t commit suicide. He was in fact murdered!
Olivia continues to investigate and learns some interesting facts about her husband’s job at the Foreign Office. Was Reggie killed because someone was leaking government secrets to the Germans in a Europe on the cusp of World War II? How deep was Reggie involved in the treason of his country? Olivia determined to find justice for her husband and to clear his name searches for clues in diplomatic circles and high society all while maintaining a reporting job for a newspaper and fending off her judgmental father. Olivia Denis is in the ranks of historical mystery super-heroines such as Lady Emily Ashton, Maisie Dobbs and Molly Murphy.
I thoroughly enjoyed reading this book. There were a lot of twists and turns that kept me intrigued. I loved the setting of England sliding towards World War II and how tense diplomacy was during that time. The author set the stage of the book well and made a story that was hard to put down. I’m so glad that this book is the first in a series and cannot wait for the next installment. Kate Parker has hit this one of the park and I am eagerly awaiting the release date of the next. A well written book to a series that I am sure will quickly become a favorite of mine.

Kate Parker has held a variety of careers, including microbiologist in two hospitals, insurance fraud investigator, office clerk, telephone line repairer, and emergency medical technician, but her favorite is writer. Only as a writer can she travel to different locales and centuries. In the last four years, since she switched from Romantic Suspense to Historical Romance, she has finaled three times in RWA’s Golden Heart® contest with three different manuscripts. Now she’s made the switch to historical mysteries with romantic elements, featuring the twists and turns and dead ends of her favorite mystery writers, including Robert Barnard, Simon Brett, Margaret Frazer, Susanna Gregory, and Deanna Raybourn. When she comes back to the present day, Kate finds herself near the coast of North Carolina with her real life hero, nineteenth century architecture and twenty-first century comforts.

This has been a stop of the Deadly Scandal blog tour hosted by Great Escapes Virtual Book Tours. Make sure that you stop by the other stops as some of them are hosting giveaways of this book!

Disclaimer: This book was given to me by the publisher, through Great Escapes Virtual Book Tours, in exchange for my honest review I reviewed this book without compensation of any kind. All thoughts and opinions are solely mine.