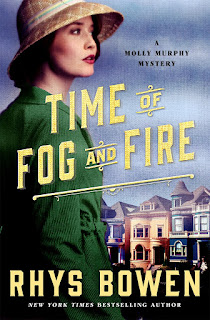 ‘Molly Murphy Sullivan’s husband, Daniel, a police captain in turn-of-the-century New York City, is in a precarious position. The new police commissioner wants him off the force altogether, so when Daniel’s offered an assignment from John Wilkie, head of the Secret Service, he’s eager to accept. Molly can’t draw any details of the assignment out of him, not even where he’ll be working.
But when she spots him in San Francisco during a movie news segment, she starts to wonder if he’s in even more danger than she had first believed. And then she receives a strange and cryptic letter from him, leading her to conclude that he wants her to join him in San Francisco. Molly knows that if Daniel’s turning to her rather than John Wilkie or his contacts in the police force, something must have gone terribly wrong. What can she do for him that the police can’t? Especially when she doesn’t even know what his assignment is? Embarking on a cross-country journey with her young son, Molly can’t fathom what’s in store for her, but she knows it might be dangerous–in fact, it might put all of their lives at risk.
New York Times bestselling author Rhys Bowen brings 1906 San Francisco to life in the next rich, thrilling Molly Murphy Sullivan mystery.’

I have been reading this series for what seems to be years. I adore the characters and must snatch up the latest installment in the series right around when it is first published. I love this author and have enjoyed her other series as well. I also love learning about the Great Earthquake of San Francisco in 1906 and this book puts Molly and Daniel right smack in the middle of all the chaos. I can’t imagine what San Francisco was like in the aftermath of an earthquake that killed hundreds and burned most of the city down. Rhys Bowen does a fantastic job of weaving historical detail into this wonderful mystery.
Molly’s husband Daniel has been given an assignment from the head of the Secret Service and has to travel across the country to San Francisco. The whole case is hush-hush and Daniel can’t even tell Molly where he is going. Molly happens to see Daniel in a news clip at the movie theatre and learns his destination. She is concerned about his well-being but knows Daniel can take care of himself. She is fine until she receives a letter from Daniel cryptically asking her to come to San Francisco. Knowing her husband, Molly fears that he has gotten in over his head and she sets off to San Francisco almost immediately. When she finally arrives in the burgeoning San Francisco she feels that something isn’t quite as it should be and she begins her search to find her husband.
Sometimes I feel that I simply cannot get enough of this series. This series never gets stale and I always enjoy reading them and catching up with the characters. The reader gets a nice little surprise at the ending that bodes very well for the series. I hope Bowen is writing the next one as soon as she can because I am already waiting for that one to release. Another fantastic read written by a fantastic author!

One thought on “Review: Time of Fog and Fire by Rhys Bowen”