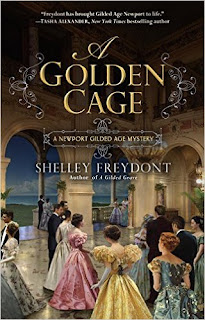 ‘The author of A Gilded Grave returns to Newport, Rhode Island, at the close of the nineteenth century, where headstrong heiress Deanna Randolph must solve another murder among the social elite.
With her mother in Europe, Deanna is staying with the Ballard family, who agree to chaperone her through the summer season and guide her towards an advantageous marriage proposal–or so her mother hopes. Relishing her new freedom, Deanna is more interested in buying one of the fashionable bathing costumes, joining a ladies’ bicycling club, and befriending an actress named Amabelle Deeks, all of which could scandalize her mother.
Far more scandalous is the discovery of a young man bludgeoned to death on the conservatory floor at Bonheur, the Ballards’ sumptuous “cottage.” Deanna recognizes him as an actor who performed at the birthday fete for a prominent judge the night before. But why was he at Bonheur? And where is Amabelle?
Concerned her new friend may be in danger–or worse–Deanna enlists the help of her intrepid maid, Elspeth, and her former beau, Joe Ballard, to find Amabelle before the villain of this drama demands an encore.’

This is the second book in the Newport Gilded Age Mystery series by Shelley Freydont. The first book in the series, A Gilded Grave, was a read that I quite enjoyed as I previously rated it at 5+ stars. This book was also a fantastic read and one that I read in two days. I really have come to enjoy reading this series and cannot wait to see what happens next. Deanna is a character that I find to be well-developed and well-rounded and one that I cannot help but like. You root for her throughout the book and you become to care about what happens. Sometimes that connection that the reader has with the character is hard to find in books but the author has no problem connecting the characters and relating them to her readers.
I love this time period. In Newport, Rhode Island in the 1890’s, society reigned supreme. Rules dictated women and what they were allowed to do, but there were new inventions being made such as the bicycle and other contraptions that were forcing the boundaries of society. Deanna is a character that likes to push the boundaries and try new things. She is intrigued by the bicycle and knows that if her mother was around that she wouldn’t be able to try these new things. I like this about Deanna. I like that she is willing to push the envelope even though she lands herself right in the middle of a murder investigation.
I really enjoyed this book and cannot wait to see what the author has planned for the characters moving forward with the series. A great read for lovers of cozy mysteries with a historical theme. I highly recommend this one! 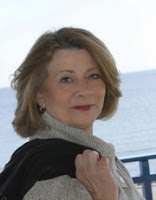 Shelley Freydont is the author of several mystery series, including the Newport Gilded Age Mysteries (beginning with A Gilded Grave) and the Celebration Bay Mysteries, as well as those featuring Lindy Haggerty and Katie McDonald. She is also the author of several novels under the name Shelley Noble, and her books have been translated into seven languages.

This has been a stop of the A Golden Cage blog tour hosted by Great Escapes Virtual Book Tours. Make sure that you stop by the other stops as well!
June 7 – A Holland Reads
June 7 –   Community Bookstop
June 8 – Back Porchervations
June 8 – Nadaness In Motion
June 9 – Shelley’s Book Case
June 10 – Cozy Up With Kathy
June 10 – 3 Partners in Shopping, Nana, Mommy, &, Sissy,Too!
June 11 – Laura’s Interests
June 12 – Melina’s Book Blog
June 13 – View from the Birdhouse
June 13 – Student of Opinions
June 14 – Island Confidential
June 14 – Girl Lost In A Book
June 15 – The Ninja Librarian
June 16 – Deal Sharing Aunt
June 17 – Brooke Blogs
June 18 – I Read What You Write
a Rafflecopter giveaway
Disclaimer: This book was given to me by the publisher, through Netgalley and Great Escape Virtual Book Tours, in exchange for my honest review. I reviewed this book without compensation of any kind. All thoughts and opinions are solely mine.