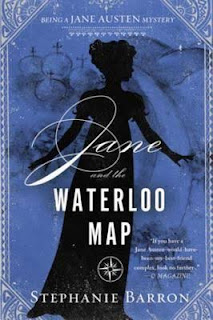 ‘Jane Austen turns sleuth in this delightful Regency-era mystery.
November, 1815. The Battle of Waterloo has come and gone, leaving the British economy in shreds; Henry Austen, high-flying banker, is about to declare bankruptcy–dragging several of his brothers down with him. The crisis destroys Henry’s health, and Jane flies to his London bedside, believing him to be dying. While she’s there, the chaplain to His Royal Highness the Prince Regent invites Jane to tour Carlton House, the Prince’s fabulous London home. The chaplain is a fan of Jane’s books, and during the tour he suggests she dedicate her next novel–Emma–to HRH, whom she despises.
However, before she can speak to HRH, Jane stumbles upon a body–sprawled on the carpet in the Regent’s library. The dying man, Colonel MacFarland, was a cavalry hero and a friend of Wellington’s. He utters a single failing phrase: “Waterloo map”….and Jane is on the hunt for a treasure of incalculable value and a killer of considerate cunning.’

I recently finished Jane and the Twelve Days of Christmas and reviewed it on this blog. In that review, I thought that the book didn’t really live up to the rest of the series and I was hoping that this newest installment would turn out better. I was correct. I enjoyed this book and it brought back the original greatness of the series, which made me fall in love with it in the first place. In this book Jane’s brother Henry Austen makes an appearance and for some reason, I always enjoy reading the books when Henry is in it. I like Henry and Jane’s relationship and their knack for bouncing off murder mysteries and clues off of each other.
Jane has rushed to London to visit and take care of a sick Henry. It was touch and go for a while, but Henry is on the mend. Jane has some down time after taking care of Henry and is invited to the Prince Regent’s London house, Carlton House, to use the library to assist her in her literary endeavors. She is shown around Carlton House on a tour and during that tour, she stumbles across a man who has been taken ill in the library. Jane jumps immediately to action and begins assisting the ill man. While she is doing this, the man whispers the phrase “Waterloo map” before he is attended to the royal physicians. Jane is perplexed by the ill man’s statement and disregards it. It is only when the man dies a few hours later that she is concerned about the dying man’s last words and the evidence of poisoning. She searches the library where the man died and finds a map with a cipher. Determined to not let this mystery be forgotten, she sets out to find out why this man was poisoned and who would have benefited from his death.
Overall, this was a great read. I am a little sad because Jane is nearing the end of her life in this series and I am wondering just how many books the author plans to write before the series is finished. This series has long been one that I enjoy and I always hate to see a good series end. This book was better than the previous installment in Jane and the Twelve Days of Christmas and I thoroughly enjoyed every page. I always enjoy the author’s portrayal of Jane and wonder how she was in real life. I also deeply appreciate the author’s willingness to try to stick to true events in Jane’s life. I am excited to read the next installments in this series until the last book is written.