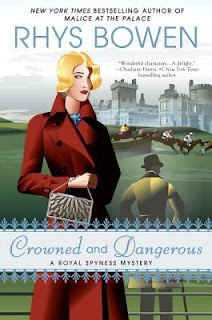 ‘Nothing is simple when you’re thirty-fifth in line for the British crown, least of all marriage. But with love on their side, and plans to elope, Lady Georgiana Rannoch and her beau Darcy O’Mara hope to bypass a few royal rules…
With Darcy driving me out of London in a borrowed motor car, I soon discover that he isn’t planning to introduce me to the pleasures of sinning in secret–as I had hoped–but to make me his wife!
Of course, there are some quibbles to be dealt with, such as my needing special permission from the King to marry a Roman Catholic and the question of where we might live after the honeymoon. Though he will inherit a title, Darcy is as broke as I am. Even his family’s Irish castle has been sold to a rich American who now employees Darcy’s father as a hired hand.
Throwing these cares to the wind, nothing could deter us from our mission–except perhaps the news that my future father-in-law has just been arrested. It seems the rich American was murdered and Darcy’s father had more than enough motive to do the deed. With the elopement postponed, we head for Ireland where he insists he’s innocent, and it’s up to us to prove it–for better or worse.’

Rhys Bowen is perhaps one of my favorite mystery writers ever. I love her wit and the quirky characters she creates in her series. Lady Georgiana has always been a favorite of mine and I love how Bowen makes her such a lovable character. Who doesn’t love Georgie? I have been following this series for quite some time now and I am glad to see so much character and story development. This series has come a long way. Not in the sense of improvement, but in the story of the characters that carries from book to book. I know when I am reading one of Bowen’s books that I will enjoy it, every single time. Bowen never fails to deliver when it comes to an entertaining mystery.
In this book, Georgie and Darcy are headed to Ireland where Darcy’s father has been accused of murdering the rich American who bought the prestigious family castle. Darcy’s father and the murder victim were heard having a heated argument the afternoon before the murder occurred. All the evidence is pointing in the direction of Darcy’s father and even Darcy believes he did it. Georgie refuses to settle and embarks on solving a mystery where so much is at stake. Georgie has to fight off inquisitive reporters that are determined to figure out who she is and why she is so involved in this murder mystery. She doesn’t want scandal to erupt if anyone finds out that she is related to the King and that she is traveling unchaperoned with Darcy.
I thought that this book was a great installment to an already spectacular series. I enjoyed reading every single page. I love Georgie’s maid, Queenie, as she is always making me laugh. If you love a good historical mystery that packs wit and smarts, this is a great series for you to discover. I absolutely cannot wait for the next installment to be released and I hate that I have to wait for the next one to come out. We all have those authors and series that we love and cannot wait to get our hands on. This author and this series is most definitely one of those for me. Another fantastic hit from Rhys Bowen.

One thought on “Review: Crowned and Dangerous by Rhys Bowen”