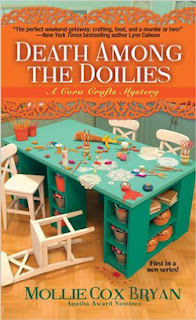 ‘For thirty-something blogger Cora Chevalier, small-town Indigo Gap, North Carolina, seems like the perfect place to reinvent her life. Shedding a stressful past as a counselor for a women’s shelter, Cora is pouring all her talents–and most of her savings–into a craft retreat business, with help from close pal and resident potter Jane Starr. Between transforming her Victorian estate into a crafter’s paradise and babysitting Jane’s daughter, the new entrepreneur has no time for distractions. Especially rumors about the murder of a local school librarian…
But when Jane’s fingerprints match those found at the grisly crime scene, Cora not only worries about her friend, but her own reputation. With angry townsfolk eager for justice and both Jane’s innocence and the retreat at risk, she must rely on her creative chops to unlace the truth behind the beloved librarian’s disturbing demise. Because if the killer’s patterns aren’t pinned, Cora’s handiwork could end up in stitches…’

Crafting is totally not my thing. I just don’t understand it or have the patience for it. Sure there are numerous times where I wish I was crafty, but it just seems that I don’t have that gene. I decided to go out on a limb here and read something a little different than the norm. Not too far from what I am used to, but just enough to take me out of my reading comfort zone. Two things drew me to this book. First, the author has some clout in the mystery world. I have seen Bryan’s name pop up a few times lately and I wanted to find out what all the hype was. Second, this book takes place in my home state of North Carolina. Nothing too exciting happens in North Carolina (if you exclude the whole bathroom issue) and I like to see how authors can portray the state in their books. Needless to say, Indigo Gap, North Carolina, seems like a place I would love to explore and spend time in.
I didn’t really know what to expect when I started reading this book. I have to say that I really did enjoy reading it. Cora is a tough cookie, but she is a very down to earth and easy to relate to. Jane is also the same way. I love that Jane has a past and that she has conquered her past struggles to become a better and stronger person. I couldn’t help but like Jane and Cora’s characters and the other townspeople the author introduces us to in this first installment of the new Cora Crafts Mystery series. I have to say that the mystery was well-developed and not easy for this veteran mystery reader to figure out. I always love that in a mystery book. The thing that I liked a lot about this book was that the point of view isn’t always Cora’s. Jane takes over a certain points in the story and I really enjoyed that because most mysteries stick with the main character’s point of view. I thought that in itself was very clever.
Usually the first installment of a mystery series determines whether or not I will continue with the series. This is one that I most definitely will be checking out in the future. I like the characters and the small town setting and even though crafting is not exactly my forte, it is nice to read about something different from time to time. I think every reader enjoys going out on a limb and trying something new every once in a while. I think that this book was a well-done debut in a series that has a promising future.

Mollie Cox Bryan is a writer of women’s stories.  Her stories have many forms: cookbooks, articles, essays, poetry and fiction.  Mollie grew up near Pittsburgh, Pa., and attended Point Park University, where she received a B.A. in Journalism and Communications. Her first real job out of college was as a paste-up artist at a small newspaper, where she was allowed to write “on her own time” and she did.
Mollie moved to the Washington, D.C. area, where she held a number of writing jobs, and has written about a diverse array of subjects, such as construction, mathematics education, and life insurance. While working in the editorial field, Mollie began taking poetry classes at the Writer’s Center in Bethesda, Md. Soon, she was leading local poetry workshops and was selected to participate in the prestigious Jenny McKean Moore Poetry Workshop.
In 1999, shortly after the birth of her first daughter, Emma, Mollie and her husband moved to the Shenandoah Valley of Va. (Waynesboro), where he took a job at the Frontier Culture Museum and she stayed at home to take care of Emma and start a freelancing career.
She was honored with an Agatha Award nomination for her first novel, SCRAPBOOK OF SECRETS. 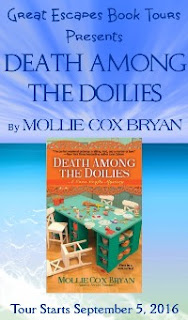