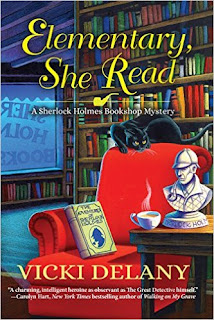 ‘Gemma Doyle, a transplanted Englishwoman, has returned to the quaint town of West London on Cape Cod to manage her Great Uncle Arthur’s Sherlock Holmes Bookshop and Emporium. The shop–located at 222 Baker Street–specializes in the Holmes canon and pastiche, and is also the home of Moriarty the cat. When Gemma finds a rare and potentially valuable magazine containing the first Sherlock Holmes story hidden in the bookshop, she and her friend Jayne (who runs the adjoining Mrs. Hudson’s Tea Room) set off to find the owner, only to stumble upon a dead body.
The highly perceptive Gemma is the police’s first suspect, so she puts her consummate powers of deduction to work to clear her name, investigating a handsome rare books expert, the dead woman’s suspiciously unmoved son, and a whole family of greedy characters desperate to cash in on their inheritance. But when Gemma and Jayne accidentally place themselves at a second murder scene, it’s a race to uncover the truth before the detectives lock them up for good.
Fans of Sherlock Holmes will delight in the sleuthing duo of Gemma and Jayne in Elementary, She Read, the clever and captivating series debut by nationally bestselling author Vicki Delaney.’

I love everything Sherlock Holmes. I love the characters and the stories and have to say that they are some of my favorites. I love to read anything and everything about Sherlock Holmes and when I learned that a new cozy series was coming out that deals with Sherlock Holmes, well I was ecstatic to say the least. This was also my first read by the author Vicki Delaney.
I really enjoyed this book. I loved the Sherlock Holmes theme, but really liked how the author used the theme but didn’t overwhelm the reader with all things Sherlock Holmes. There certainly were a lot of similarities, but the author created her own story and characters that made them uniquely different from Sherlock Holmes. I liked that. Gemma’s character has similar tendencies that are like Sherlock Holmes, such as her keen observation and deduction skills, but they don’t quite top those of the famous detective, which makes her more relatable to the reader. Gemma, herself, is not a huge fan of Sherlock Holmes, she just runs the bookshop and emporium for her uncle and her best friend, Jayne, runs the Mrs. Hudson’s Tea Room.
Gemma feels that she has a responsibility to investigate the murders as the magazine was located in her bookshop. She is frustrated with the local police and their determinations that she had motive and opportunity to commit the murders herself. This book was a great read that I found all too enjoyable. A wonderful debut to a series that I hope continues to for a long time to come. 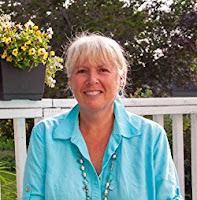 Vicki Delany began her writing career as a Sunday writer: a single mother of three high-spirited daughters with a full-time job as a computer programmer. Sunday afternoon was – and at that, only now and again – the only time she had to spend all by herself, with a single candle on her desk for a bit of atmosphere, a Bruce Springsteen tape in the tape deck, and a nice cup of tea at her elbow. When she felt like really letting loose, the tea might have turned into a glass of wine.
The years passed, as they tend to do, and the three daughters, somewhat hesitantly, flew the coop, leaving Vicki more time to devote to her writing.  She was able to write three novels of suspense, set in Ontario, two of which, Scare the Light Away and Burden of Memory were published to critical acclaim by Poisoned Pen Press of Scottsdale, Arizona.
In 2007, Vicki took early retirement from her job as a systems analyst with a major bank and sold her house in Oakville, Ontario.  At that time In the Shadow of the Glacier, the first book in a police procedural series set in the British Columbia Interior was published. After travelling around North America for a year with her dog, Shenzi, she bought a home in bucolic, rural Prince Edward County, Ontario, where she rarely wears a watch and can write whenever she feels like it.
Since settling in Prince Edward County, Vicki has continued with her writing career, publishing books in several different sub-genres as well as a book for adults with low literacy skills. 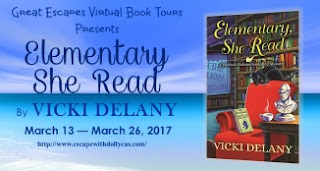 This has been a stop of the Elementary, She Read blog tour hosted by Great Escapes Virtual Book Tours. Make sure that you stop by the other stops and enter the giveaway for a chance to win a print copy of this book!